The following post was written and/or published as a collaboration between Benzinga’s in-house sponsored content team and a financial partner of Benzinga.

EpicHero is the biggest 3D NFT War Game on the Binance Smart Chain Network. Collect and build an unstoppable force of characters by choosing from your favorite heroes from Greek, Norse, China, Japan, Egypt, India and Roman Mythology. Users can summon, merge and evolve thousands of Collectable Epic Hero Battle Card NFTs and bring them to the largest arena to do battle against other Epic Heroes.

Moreover, EpicHero is the First Ever play to earn game that rewards its NFT holders with 5% BNB of token transaction and NFT marketplace transaction tax. This innovative mechanism gives the EpicHero NFT holder’s great passive income overtime simply by holding the NFT in their wallet.

As the world’s first NFT to give holders reflection rewards in BNB, EpicHero is expected to be a true game changer. You could say, EpicHero is the Safemoon of NFT. EpicHero is the pioneer in this field and is committed to bring more innovative ideas and applications to change the whole GameFi space.

What makes EpicHero special is its 3 killer features, only with EpicHero:

1. World’s first NFT game and the only one until now that gives NFT holders reflection rewards in BNB.

The longer you hold EpicHero 3D NFT, the bigger the amount of dividend you get in BNB.

With highly limited numbers, this feature makes Epic Hero 3D NFT more attractive in the long run because everyone desires to own it.

2. Largest scale battles on BSC with thousands of users each, potentially using thousands of NFTs to compete at the same time to win real money prizes.

3. True 3D NFTs that users are excited to own and show off, each with unique looks and stunning graphics. For the first time, users can fully view their NFT in 3D mode, rotate, zoom in and indulge in a spectacular 360 degree view.

Not only can you choose your favorite heroes from Greek, Norse, China, Japan, Egypt, India, Roman Mythology, but the local community can also vote for the next heroes based on their culture and EpicHero will create a NFT for it!

By connecting Game and Culture, it will be easy to connect and spread players. Imagine what it would be like if a Vietnamese gamer got a Hero like Lac Long Quan or Au Co. And the same for those who are fans of Napoleon, Quanyu, Naruto.

No borders, no restrictions on creativity, the number of 3D NFTs that can be created is endless. As long as the culture has appeared on Earth, EpicHero will be able to bring it into the game.

Why should I invest in EpicHero?

The answer by the team is simple, EpicHero is the Safemoon of NFTs. EpicHero has something that no other projects until now has had, which will benefit EpicHero NFT holder’s long term:

These 2 mechanisms make sure that holding Epic Hero NFT brings more and more value in the long run for its holders. The project has also been thoroughly audited by Thoreum Auditing team, and the audit by RugFreeCoins returned 0 issues. 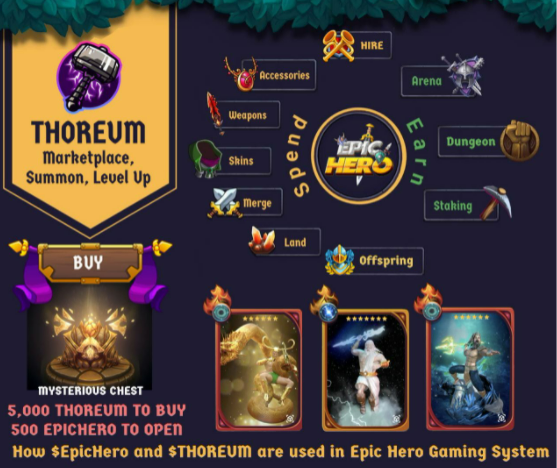 Backing EpicHero through the rain or shine is their strategic investor Thoreum, who has very strong financial as well as user base support. They have a famous community of diamond hands investors. Through the hard times in the journey with Thoreum they have learned about how to invest in a long-term x100 potential project like Thoreum and the team believe they can have the support from them over here at Epic Hero.

Thoreum already has 20 local groups with a total of 140,000 members, including Indonesia, Vietnam, India, Bangladesh, Iran and others, which EpicHero has gained immediate exposure to. Thoreum’s huge network spans the entire globe, across their telegram pages interacting with hundreds of thousands of people from various nationalities, religions, languages and ethnicities.

Thoreum is very strong in marketing and massive advertising has already begun. USD 200,000 has already been spent to advertise EpicHero everywhere on BSCscan, Poocoin, Coinzilla, BSCNetwork, PlaytoEarn.net, BSCNews, with famous influencers on Twitter, and multiple AMAs with investment groups and media partners. This is just prior to the launch of EpicHero, with further activities and investments to come.

Special care has been taken to attract the clients from all those various backgrounds you mentioned. All are welcome at Epic Hero and communities look forward to gathering in the largest Battle Ground On the Binance Smart Chain.

Long term development & long term benefit for investors is EpicHero’s main target, which is also why EpicHero chose to be a strategic partner with Thoreum, the project that has been battle tested and has the right recipe for resilient long term growth, even in bearish periods of the market.

It’s a combination of built in strengths of the tokenomics, multiple innovative use cases, talented & dedicated team, focus on delivering a SAFU project, and strong, proactive marketing.

For EpicHero’s long-term growth, a burn mechanism is in place with 1% built-in burn in each transaction, therefore the more time the token is in circulation the fewer tokens there are and the rarer they become. EpicHero also have reserve funds like Thoreum’s 5000 bnb Thor Thunder, that’s the best warranty during a bear market.

Not only is Epic Hero NFT highly limited in numbers, but also it will become rarer and rarer day by day because of EpicHero’s NFT merging (burning) mechanism. User can choose 2 heroes to merge into a new 1 with better attributes or rarity, so the number of heroes will be decreased a lot over time.

The multiple use cases, from play2earn, collecting to simply holding for passive income, makes EpicHero friendly to anyone, and attractive in various states of the market.

The preceding post was written and/or published as a collaboration between Benzinga’s in-house sponsored content team and a financial partner of Benzinga. Although the piece is not and should not be construed as editorial content, the sponsored content team works to ensure that any and all information contained within is true and accurate to the best of their knowledge and research. This content is for informational purposes only and not intended to be investing advice.