For Goldman Sachs there has been an evolution of the BTC narrative as a digital store of value.

The bank reveals that Latin America represents 7% of the global adoption of digital assets.

The US investment bank Goldman Sachs recognizes Bitcoin (BTC) as a valuable asset and medium of exchange. For that, it separated the coin from the other initiatives on the market, giving it a rating of “pure cryptocurrency”, unique and without equal.

In its ‘Overview of Digital Assets’ report, the bank points out that Bitcoin is very useful right now. For the entity, there has been an evolution of the narrative of BTC as a digital store of value driven by scarcity, security and brand equity.

According to the institution, BTC is “especially useful in countries with unstable currencies”, such as Venezuela or Argentina, where adoption has been driven by inflation. Furthermore, he claims that there has been a increased acceptance of currency as collateral for financial transactions.

For them, it is “unlikely” that Bitcoin will be used for commerce and payments, as its characteristic volatility “makes it less suitable as a medium of exchange.” However, countries like El Salvador already consider it legal tender and it is used for everyday payments.

Utility tokens and other applications

This means, in the bank’s words, that they use blockchains to facilitate additional services, such as smart contracts, exchange discounts, identity verification, and distributed storage.

In a third line of most used applications, there are stablecoin, or stable coins, which make parity with the US dollar and the euro, in some cases.

The bank also gave space to non-fungible tokens (NFT), a technology that had exponential growth during 2021, mostly on the arm of play-to-earn games, like Axie Infinity.

In this line, they located Decentraland, the metaverse where the NFTs have had a great presence, being a first taste of what the Web3 promises, currently in full development.

For Goldman Sachs, the NFTs they are a unique and negotiable digital asset that represent the digital ownership of a good, leveraging open source and decentralized blockchain to “enforce authenticity and proof of ownership.”

In the last line are the financial infrastructures and everything related to their applications. Among them, he mentions Coinbase, the centralized exchange with the largest presence in the United States. Cypto.com and the European Investment Bank were also featured on the list.

In this item, related parties use blockchains to create opportunities to digitize capital markets, such as securities, custody or brokerages. This, added to the ability to store historical data, ensuring the origin of the goods. 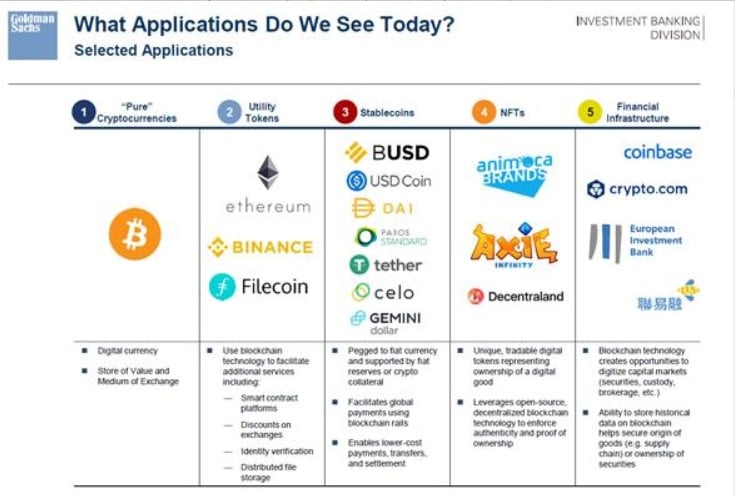 The five lines of applications most used today, where Bitcoin is individualized as the only pure cryptocurrency. / Source: Goldman Sachs.

On the other hand, the data from Goldman Sachs revealed that Latin America represents 7% of total global digital asset adoption, only surpassing Africa (2%) and the Middle East (5%).

For the company, East Asia is the region that represents the most adoption, with 31%, while Central and South Asia, together with Oceania, comprise 12% of global adoption.

Northern and Western Europe have 17% adoption, while Eastern Europe reaches 12%. North America, on the other hand, accounts for 15% of global digital asset adoption. 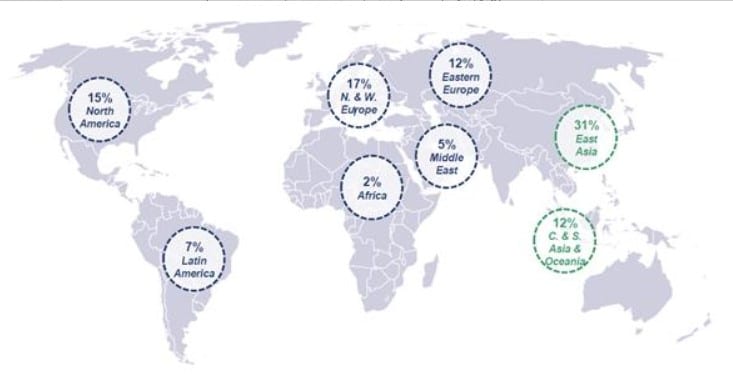 Goldman Sachs Has Shown a Bitcoin Friendly Face Before, so the fact that it has classified it as a “pure cryptocurrency” adds to the already known acceptance of the asset.

A few months ago, his union with the financial services and cryptocurrency investment company, Galaxy Digital, made headlines. to provide liquidity in bitcoin futures operations to the clients of the financial institution.

With this fact, the bank used for the first time a digital asset company as a counterpart to provide it with quotes on buy and sell orders for bitcoin futures on the CME Group exchange, as reported at the time by the US news channel CNBC. .

In a similar vein, the president and CEO of the US investment group Goldman Sachs said that Bitcoin was “important to our clients and to the future of global financial systems.”

So much is the acceptance, that they indicated that they were to advance “significantly” in the areas of bitcoin, blockchain and digitization of money, as recorded by CriptoNoticias.

Thus, it is possible to infer that in 2022, Goldman Sachs will have a greater exposure to Bitcoin, being part of one of the large companies that supports the digital asset and everything that has to do with the new economy.