The X-to-Earn model that incentivizes users to be active in exchange for crypto rewards is expanding across the game, fitness and K-pop industries.

A similar model was initially found in play-to-earn games, which allows users to collect crypto and non-fungible tokens (NFTs) tradable on the market. The model was disapproved by a local game rating administration committee for gambling concerns, but the trend has since evolved and spread to various industries, including those of fitness and K-pop fandoms.

One example rising in popularity is move-to-earn (M2E) model.

Under the model, users that walk, run or jog wearing NFT sneakers are rewarded with crypto in accordance with the distance they completed and quests completed on their journey. Users can make a profit by receiving the crypto and selling NFTs on in-app or open marketplaces.

Another up-and-coming model is called fan-to-earn (F2E), which allows fans to create and trade digital content featuring artists on an open marketplace.

HYBE, the entertainment agency behind BTS, Justin Bieber and Ariana Grande, is taking the lead. The agency launched an NFT joint venture in the United States with crypto exchange operator Dunamu in May. Their plan is to help fans profit from their time spent doting on their favorite artists, like selling exclusive video NFTs featuring an artist during a concert.

SM Entertainment, the agency behind aespa and Exo, said that it is working on building a creator economy, where people can recreate original content and generate profit.

“We’re nearing an era with an ecosystem where people can endlessly create digital assets that are acknowledged as actual assets,” said Park Sung-jun, CEO of Andus, which operates the AndUsChain blockchain platform. He added that recreating value from existing intellectual property and big data, and making creators profit from them, is “how every business will be done in the future.” 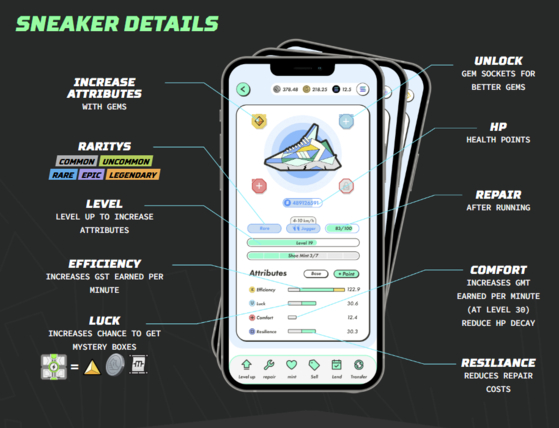 STEPN shows on its website how to read the details of a pair of NFT sneakers on its app. [SCREEN CAPTURE]

M2E is currently one of the fastest growing X-to-Earn models in Korea.

Australia-based STEPN launched its M2E in Korea in February, which was followed by Seoul-based projects, including Snkrz and SuperWalk.

Though they are still in the initial stage, the services are growing rapidly.

Snkrz, which announced last month plans to launch officially, has around 100,000 users on the Discord app, and branched out to Japan. SuperWalk, which launched its open beta in June, has more than 30,000 users on Discord.

Using GPS technology, the apps record users’ activity data and provides exercise statistics, including number of steps, distance traveled and calories burned. To use the service, however, users have to buy or rent a pair of NFT sneakers, the price of which could exceed $1,000.

They are able to generate revenue based on different standards, including the distance they run. The sneakers have different earning capabilities, and owning more pairs or upgrading allows users to maximize their income.

The platforms’ source of profit includes commission from users’ trading of NFTs.

“The key to these operators’ survival is whether they can create added value from the digital assets, because giving out crypto rewards is a marketing cost for them,” said Park from Andus.

Another potential revenue stream would be to team up with offline channels.

“The services can encourage users to head to a certain location, like a newly-opened shopping mall, to raise traffic there,” said Prof. Kim Sang-kyun, who teaches media and commerce business at the Graduate School of Business at Kyung Hee University.

M2E services are backed by major game and digital companies, who hope to create beneficial connections with their own metaverse services.

Wemade, known for its Legend of Mir series, invested in both Snkrz and SuperWalk. Naver Z, operator of the Zepeto metaverse service, is also an investor of SuperWalk.

Neither has revealed the amount they invested.

“The largest topic in the crypto industry is whether they can be used in real life,” said Ahn Young, a spokesperson for Wemade. M2E businesses have “created means for a lot of crypto’s actual usage and utility of the crypto in people’s living economy.”

WeMade is creating what it calls a global blockchain “ecosystem,” by expanding its crypto-based services, including NFT and finance platforms.

Ahn added, “for crypto to enter the real economy, we need clear legal and political guidelines.” 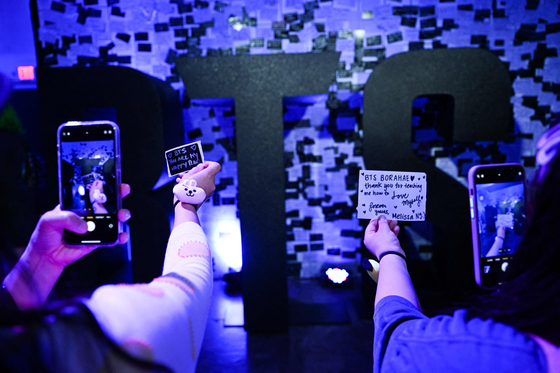 K-pop fans take pictures of their notes written on stickers posted on a wall as they visit a BTS pop-up store to promote the album “Proof” in Los Angeles on June 15. K-pop supergroup BTS announced on June 14 they were taking an indefinite break to focus on solo activities. [AFP/YONHAP]

But entertainment agencies are reimagining fandom culture by allowing fans to profit off of content creation.

Under this business model, fans are able to own, create and trade digital content featuring artists.

HYBE established Levvels, a joint venture created with Dunamu, in the United States in May.

Its goal for the joint venture is to create and sell NFTs inspired by artists represented by HYBE, like digital photo cards, and allow NFT holders to trade them on a marketplace.

Fans will be able to recreate the original content and sell them to other fans.

“We’re not sure how familiar fans are with NFTs,” Lim Hye-mi, a spokesperson for HYBE, said. But, she added, HYBE is heading toward the metaverse and Web 3.0, and it hopes the Fan to Earn business model can motivate people unfamiliar with NFTs to more easily embrace the concept.

The NFT project with HYBE was selected by Dunamu as its next milestone, and is being directly led by Dunamu Chairman Song Chi-hyung.

SM Entertainment also came on board.

The agency did not specify its plans on how fans will earn a profit from the artists’ intellectual properties, but its founder and producer Lee Soo-man said the basic concept will be creation.

“Right now, to be a fan, you have to buy products from K-pop artists, like going to concerts,” said Sebastien Borget, co-founder and chief operating officer of The Sandbox metaverse platform operator. But in the metaverse, fans have a lot more chances “to be closer to the artists. They can visit their virtual space, co-build the space, having more of a voice into what they can do.”

Relying on people’s creation ability was a natural choice following the success of ordinary creators on YouTube.

“Companies have already experienced the popularity and effectiveness of user-created content in the YouTube era,” Prof. Kim said. “Fans will be able to create NFTs featuring video clips of artists, and, based on that, secondary content can be created.”

But for it to work sustainably, there needs to be “a clear system that divides the profit revenue of different creators based on the level of their contribution toward creating contents.”

The coin price also needs to be stable for the reward models to work.

“Incentives like play-to-earn, staking, airdrops, etc. are great at attracting new users,” said Binance founder and CEO Changpeng Zhao, on Twitter in May. “But if the project doesn’t have a ‘revenue’ model that is greater than the ‘incentives,’ the coin price will eventually crash due to over supply.”