Bitcoin, petro and tether are the three most used digital assets in Venezuela, says Asonacrip.

Bitcoin (BTC) and cryptocurrencies saw this year in Venezuela a place where they could develop and expand. Although for some this situation responds to the crisis, there are those who argue that, rather, it is an advance that is taking place in Venezuelan society.

José Ángel Álvarez, businessman, enthusiast and president of the National Association of Cryptocurrencies (Asonacrip), is one of them. In his opinion, in the Caribbean country there are many people who “are eager to find solutions” and, therefore, point to bitcoin.

«We do not see growth as a necessity, but as an advance that is taking place in the daily life of Venezuelans, precisely because many people are eager to find solutions, not only from the point of view of traditional finances, but in the cryptocurrency sector, “he said, during an exclusive interview with CriptoNoticias.

This was said on the occasion of the report by the blockchain analysis firm Chainalysis reviewed by CriptoNoticias, which lets it be known that in Venezuela there is a huge peer-to-peer (P2P) trade, or without intermediaries, by the necessity derived from the economic crisis.

According to Álvarez, the option to use bitcoin is being quite positive in Venezuela, where “it is common to see advertising related to BTC on billboards and buses.” “The industries of digital mining and fintech technology are developing and a legal and regulatory framework is being developed that opens the doors for legal certainty and advances in the creation of cryptography,” he explained.

We believe that all areas related to bitcoin are developing rapidly in Venezuela, because our country is experiencing an economic situation.

There are more and more billboards for bitcoin in Caracas / Source: Twitter.

Cryptocurrency trading is in full growth

Álvarez revealed that, according to recent calculations by the organization, in a single week they got to trade in Venezuela the volume equivalent to more than one month of work on the Caracas Stock Exchange (BVC).

“Although they are somewhat subjective estimates, we consider that they are positive for the growth of the cryptocurrency ecosystem in Venezuela,” he said.

In addition, he indicated that BTC is one of the most used cryptocurrencies in Venezuela. The second, “paradoxical as it may seem,” he said, was the petro, the digital asset created by the Venezuelan government. Third was the stablecoin tether (USDT).

This was said by Álvarez, citing a poll conducted by Asonacrip on Twitter. He clarified, however, that they do not have official data to attest to this use.

The results of that survey, for Álvarez, let it be known that “there is a diversity and a growing demand for different cryptocurrencies, which enriches the knowledge of the business and ordinary population.”

These cryptocurrencies, he specified, have a greater presence and use in Caracas, the Venezuelan capital, where they are being sold in stores, still lifes and cafes, something that is confirmed by a report made by CriptoNoticias. 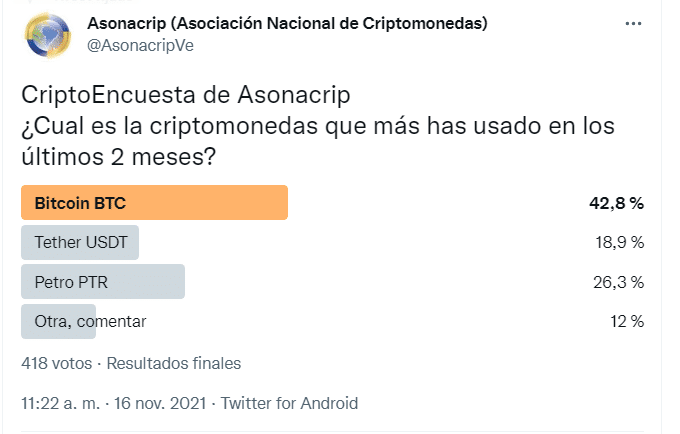 However, it clarifies that cryptocurrencies are not yet a mass payment method in Venezuela, so having complete certainty of the activity is, for the moment, unlikely.

“From our private initiative we consider that Venezuela has all the potential to adopt bitcoin, and for that it must comply with regulations and have an order,” he said.

Álvarez also talked about digital mining, an activity that in Venezuela has found a market niche in which to establish itself. For him, you have to mine in the industrial zones of Venezuela.

This, because in these places there is, as he explains, idle electrical capacity, conducive to mining activity, “regulated and arbitrated by local authorities, who work in a ‘joint way’ to favor the extraction of BTC«.

It is no secret to anyone. We are facing a bull market in the price of BTC that makes the mining industry more attractive. Venezuela has been experiencing constant growth and a whole legal support is being created, with companies licensed to operate, with legal security. Although it is true that mining has never been an illegal activity, there was a legal vacuum, which prevented national and foreign capital from betting safely on this new reality in the country.

It clarifies, in any way, that Venezuelan law does not consider mining to be a crime, although there are administrative sanctions, whose penance is equivalent for a business premises not to deliver tax invoices.

For this reason, he explains that the regulatory entity, which is the National Superintendence of Crypto Assets and Related Activities (Sunacrip), has repeatedly called for mining to migrate to industrial zones, “because no residential area is created or developed from the point of view of of electrical sight so that it can support equipment that works all the time.

“Therefore, knowing the new regulations, we call for this activity to move to industrial areas or through different companies that offer hosting services,” he asked, and it appeared that, if there are miners without a license and operating illegally, they will be located and later, sanctioned. 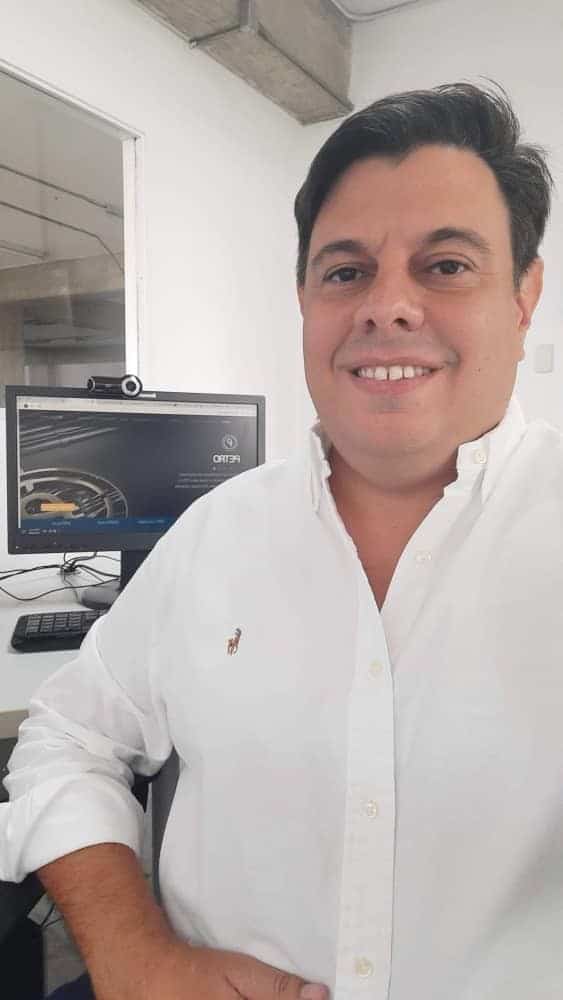 “The cards are drawn”

In the opinion of the president of Asonacrip, “the cards are drawn”, when referring to the regulation and development of the cryptocurrency economy on Venezuelan soil.

It highlights that there is already a governing body (Sunacrip), as well as a whole guild that is working in the development of the activity in the Latin American country.

However, and even with progress, he regrets that there is still a lot of ignorance in Venezuelan society about Bitcoin, despite the fact that there are media and platforms dedicated to the subject. “That is why there must be financial training, so that activities related to bitcoin develop in a positive way,” he said.

The sky is the limit. There is great interest, we have an initial base that has been difficult for us to achieve, on the legislative and institutional issue. Based on that, the breeding ground is ready for Venezuela to become a technological powerhouse from the blockchain point of view and we become a crypto-donation.