Ethereum Classic was moving to new heights in August 2022, propelled by the unclear results of ETH moving to Proof of Stake and loss to miners. While the upside movement of ETC was motivated by the miners shifting to Ethereum Classic, the fundamental reason behind this growth was still lacking. Because of an unexplained rise in value, ETC prices began to fall back to their original levels before the breakout to under $40.

The competition with its fundamental rival, ETH, is the largest hindrance to the growth of this token. The outlook for ETC based on its non-developing algorithm and capabilities raises questions on whether this token will be witnessing any bullish rise in the coming future or not. For smart contracts and DApps, many networks and blockchains are capable of providing a better platform than ETC. The market capitalization of ETC is still strong as this cryptocurrency is ranked 21st with a value of $3.7 billion and 65% token liquidation.

ETC token has slipped from its upper resistances, falling back to its pre-breakout support at $27.5. The outlook for this token has tanked from emerging bullish to ongoing consolidation. The volumetric and daily price action have succumbed to new lows with huge upside movement required to reach just its previous resistance level. Will that happen soon? Read our Ethereum Classic prediction to know!

The unclear Ethereum Classic outlook of its two major technical indicators, RSI and MACD, has been a huge hindrance to the prospects of ETC. The RSI has slipped to a level slightly above the negative indication allowing the survival and consolidation of ETC near $30. Looking closely, we can find the uncertainty in price action to be followed by a fall in transaction volumes.

The MACD indicator has made a bullish crossover, but its impact on the already declining price momentum seems very small. On the other hand, ETC is testing the support level of $26.25. Once this support level is breached, the outlook for ETC would shift towards the extreme negative, and prices for its token could once again slip below $20. 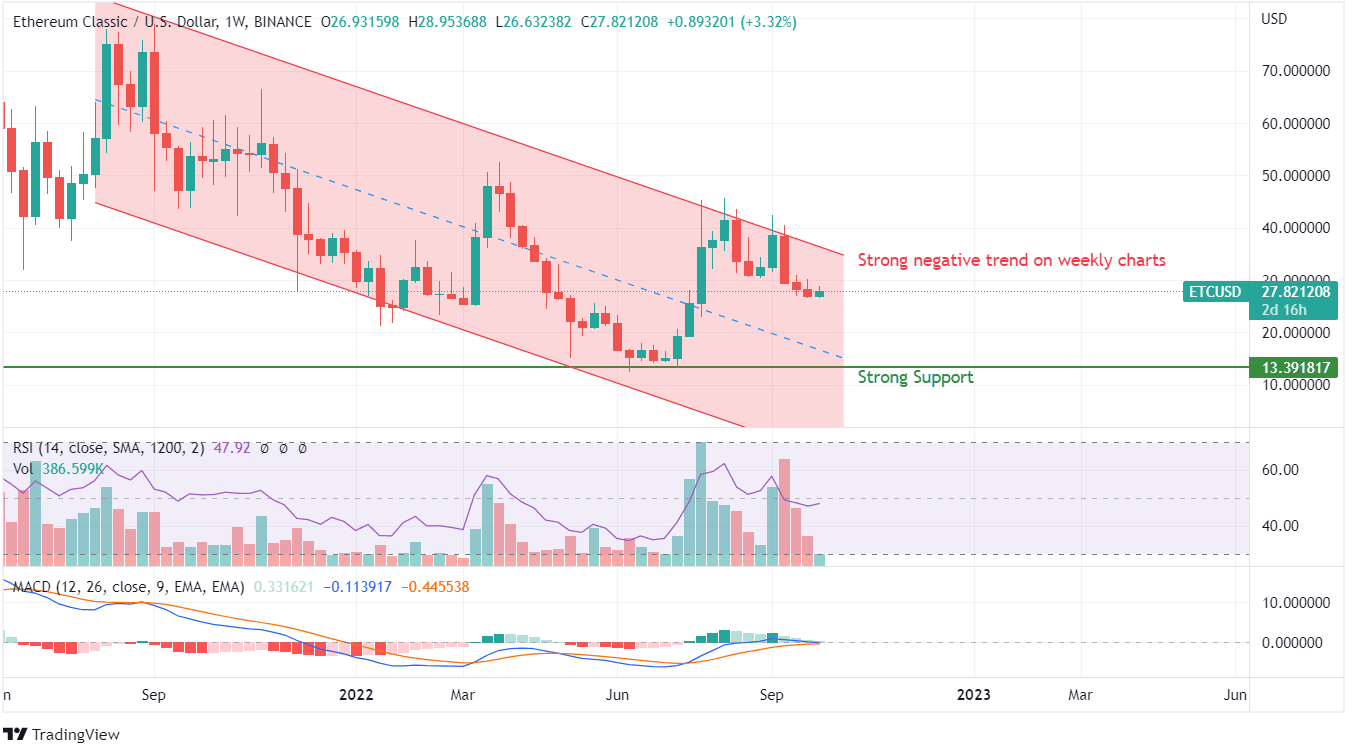 Coming to weekly price action, Ethereum Classic has failed to create a bullish breakout despite repeated attempts to reach its previous highs. The fall from September 2021 to September 2022 has resulted in a significant decline, with $13 becoming a zone of strong support. Hence creating the perfect backdrop for a further decline of its current peak values.

Ethereum Classic has failed to reach a nexus point. Falling to its previously established support level of $13 could result in an explosive reaction for its supporters as ETC would be well-declared a sinking ship. For long-term holders, the pattern should be a systematic investment instead of a lump sum investment.