Cryptocurrencies have recorded a significant recovery following a rate hike by the Federal Reserve. Fears of an imminent recession have also ignited a bullish sentiment. With crypto often seen as a hedge against inflation, some are reaping big. One such token is Bitcoin Cash BCH/USD.

Bitcoin Cash was forked from Bitcoin with the promise of a bigger block size and faster transactions. Seen as a more efficient alternative to bitcoin, Bitcoin Cash is living up to the very promise. Its native token has jumped 8.29% in the past day, bringing weekly gains to 24%. Comparatively, Bitcoin has pumped a miniscule 4% in the past 24 hours and 2.44% in the last week..

Zooming out further, despite the closer correlation between Bitcoin and Bitcoin Cash, the latter is showing a stronger recovery. Bitcoin Cash is up 53%, while Bitcoin has surged 16% in the past month. Of course, this is taking into consideration a $450 billion market cap difference between the two tokens.

Nonetheless, Bitcoin Cash remains susceptible to the factors affecting the original blockchain. Both tokens are down 64% and 87%, respectively, from the highs of last year. Aside from the correlation, Bitcoin Cash is showing some positive developments from the technical outlook. 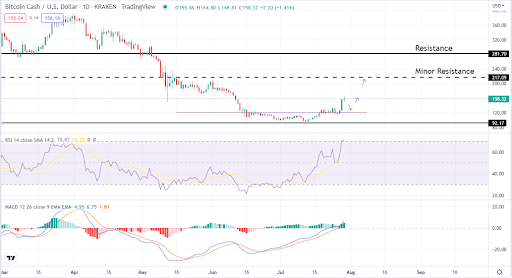 BCH is on a strong bullish momentum, currently trading at $158. The MACD has crossed from below to above the signal line. If the momentum continues, the focus will shift to the $217, which is minor resistance. Further, $281 is the other important level that investors should keep an eye on. On the flip side, BCH could be preparing for a retracement.

The RSI indicator is at the overbought zone, a level that was last seen in March. If this is the case, $120 becomes the immediate fallback for Bitcoin Cash. If the level does not hold, the token can slide further to $92.

BCH is not a buy at the current level. The token could be preparing for a short-term retracement. Investors should watch $120 as a potential entry point and take advantage of the next bull run.