Let’s wrap Bitcoinist’s coverage of the Oslo Freedom Forum with controversy. In this last edition, two stablecoins proponents and an extremely confused journalist make their cases. Alex Gladstein, the Human Rights Foundation’s Chief Strategy Officer, has been a big proponent of stablecoins over the Lightning Network. His case is that dissidents need a less volatile currency than bitcoin. Did the Oslo Freedom Forum panelists do a good job explaining why is that? Keep reading to find out.

And speaking about reading, if you’re interested in the other side of bitcoin, check out these real-life stories straight from the Oslo Freedom Forum: one, two, three, four, five, six, seven.

Oslo Freedom Forum: Troy Cross On The Idea Of Bitcoin

Before we get to the controversy, let’s examine the beautiful words of Troy Cross. We don’t even have to introduce him, because he does so himself.

“I’m a professor of philosophy & humanities at Reed College and also a fellow at the Bitcoin Policy Institute. I’ll tell you my story first and then I’ll introduce the panel. I started getting interested in Bitcoin in 2011. I was fascinated by the idea of money that was not controlled by a state and would disintermediate a predatory and rent-seeking industry. And I started mining this cryptocurrency in my basement with some machines that I had, and I was excited about the community. The possibility. The idea.

I’m a philosopher. I thought this was one of the most beautiful ideas I have ever encountered. And I followed Bitcoin because I loved the idea. I loved the idea of disintermediating financial institutions and having money that was outside the realm of the state, an idea that spun into a valuable reality and promised to bring the kinds of liberty and freedom to people that we have seen here at this event.”

This is just the beginning. Start thinking about bitcoin and you’ll probably never stop. It’s a deep, powerful, and miraculous idea that could take over your life.

The “stablecoins over the Lightning Network” concept was ever-present at the Bitcoin 2022 Conference, and the Human Rights Foundation even offered a 1 BTC bounty for anyone that could solve the problem “without needing an exchange or another token.” It’s weird that he had Paolo Ardonino at the Oslo Freedom Forum because Tether is just that, “another token.” Ardonino will get his turn to speak. First, Ire Aderinokun, community organizer and Buycoins co-founder, tries to explain why Nigeria needs stablecoins.

“So stablecoins have been a really good alternative for people to use because, if you wanted to have access to dollars in Nigeria, let’s say you want to keep your money in Nigeria, but you want it to be in dollars. So you would try to open a USD denominated accounts, but there are so many issues with that because one, it’s not accessible to everyone. And two, there’s so many different restrictions on it.

It’s like, if you have a dollar card. The restriction now is like, you can probably spend $20 a month, which is completely ridiculous. What are you going to do with that? And it’s not even unheard of for you to wake up one day and find out that the government has just converted all your dollars into Naira, at whatever rate they choose. So keeping money or dollars in Nigeria is just not an option for most people.”

The rich countries have a hard time seeing this, but it’s a common situation all over the world. However, bitcoin fixes this. Does Nigeria need stablecoins or to learn to deal with volatility? Let’s go back to Aderinokun for an explanation.

“So most people will then try to say, “Okay, let’s send my money abroad, let me try and send it to a U.S. bank account or something like that.” And that is also incredibly difficult because, okay, how are you going to do that? First of all, there’s obviously restrictions, like I already mentioned. But even if you wanted to use something like a TransferWise or a Western Union, they’re pretty slow. The rates they give you are also going to be not that efficient and they don’t even always work.”

“And so people are now turning to stablecoins because this is a way for them to access dollars without having to through the traditional system that doesn’t really allow them to do that. So most people who, like you said, aren’t even really that interested in Bitcoin or cryptocurrency in general and very interested in stablecoins as a way to have their money outside of the Nigerian financial system.”

Nigerians want stablecoins because that’s what they know. What they need, though, is bitcoin. It would solve the problem Aderinokun presented to the Oslo Freedom Forum without the counterparty risk that stablecoins present. Why is there counterparty risk? Because a private company issues them. Tether, for example. Speaking of that…

As Tether’s Chief Technology Officer, Paolo Ardonino probably has had this conversation a million times. Trying to explain why the world needs stablecoins, he explains the need for bitcoin instead.

Because the reason is that opening a bank account, maintaining a bank account is extremely expensive. But at the same time, stablecoins have great purpose. They are a great utility for all the many people. They might not believe in cryptocurrencies but they need access to hard and strong currencies because in their day-to-day life need that. They need to protect their investment. They need to send their children to universities and so on. And their national currency doesn’t allow that.”

25/ Finally — and importantly — @_elfaro_ investigative journalist @raudaz_ on how Bukele is seizing arbitrary power in El Salvador as he imposes Bitcoin on the population, and why financial freedom isn’t good enough if you don’t have political freedom: pic.twitter.com/gAfNVuxGCO

It’s a shame that the only Latin person in the Oslo Freedom Forum panels was this so-called investigative journalist. Nelson Rauda works for El Faro, a newspaper financed by foreign powers that is completely opposed to the Salvadoran government. We at Bitcoinist don’t cover politics, so our criticism of President Bukele limits to the terrible Chivo Wallet, an Article 7 analysis, and constant mentions of the lack of Bitcoin education that the government promised.

“The Salvadoran Bitcoin experience has been and is paradoxical. It’s imposed from the top down. It’s not grassroots based. A December national poll revealed that only 10% of people believe the main beneficiaries of the Bitcoin law, which turns a year next week, are the people. While 80% believe that either the rich, foreign investors, banks, businessmen, or the government are the main beneficiaries. So what I’m saying is that Bukele has weaponized bitcoiners and their tweets to whitewash himself and the crooked actions of his government.”

Say what you want about Bukele, but the man made bitcoin legal tender in El Salvador. That fact will go down in history as the greatest thing a president has done for his people. That and only that is the reason bitcoiners tweet about Bukele. If the Salvadorans that El Faro polled don’t understand the magnitude of the gift they’ve been given yet, that’s fine. They will eventually.

“But if you believe in Bitcoin, you can cheer on the President and the government, giving Salvadorans this tool for financial freedom and still call onto him democracy, rule of law, separation of powers, freedom of the press and all of the other things that humans beings need. I don’t believe in a tool for financial freedom if that’s the only freedom that we’re going to have.”

Luckily, nobody cares about what Rauda believes. Except for Alex Gladstein, who made the mistake of inviting him to the Oslo Freedom Forum. Gladstein constantly tweets against Bukele and his politics, but, did he have to invite a foreign-sponsored pseudo journalist with the worst takes about bitcoin? Couldn’t he find a critic versed in the subject? Probably not. Because someone who understands bitcoin would immediately realize that the Salvadorans now have access to hard money. And that’ll change their lives in ways no one can imagine. 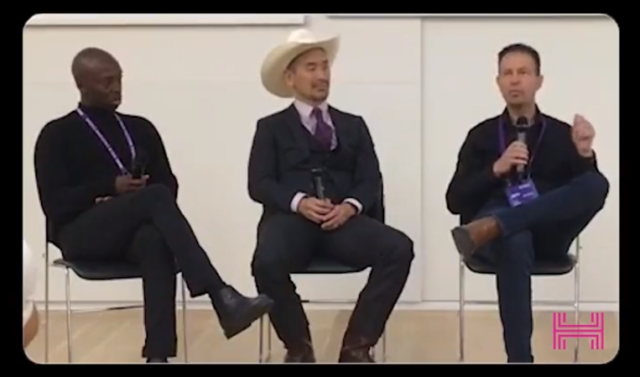